I have enjoyed studying and teaching Leonardo da Vinci for almost twenty years now. But I had actually been buying books about him for a number of years before that. Even before I knew why, I was fascinated by Leonardo, the ultimate Renaissance man. And of course, the more I learned about him, the more fascinated I became.

Not only was Leonardo an amazing artist, he studied so many other topics, it almost boggles the mind to consider the things he was interested in, including, but not limited to: anatomy, astronomy, botany, cartography, geology, and zoology. The list seems endless, as do the pages in his notebooks on these and so many other subjects. It seems that very little was outside of Leonardo’s interests. 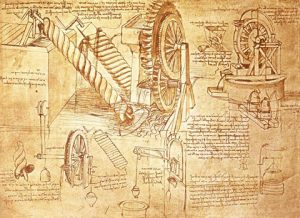 The first time I had the privilege of teaching a series of classes on Leonardo da Vinci, we delved into a different interest of his each week for eight of our ten weeks. After our introductory session we spent another class learning about Leonardo and his interest in the human body, another one on his interest in horses and his work on the equestrian monument in Milan, and yes, we even did a week on his amazing art. (You can see many of his paintings on this page – but please note, that page is still a work in progress!)

Not surprisingly Leonardo considered his art and his science to be mutually dependent, once saying:

“Study the science of art and the art of science.” 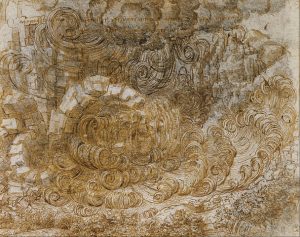 And it is clear from looking at his work in both areas that he excelled in each of them! Had his notebook pages been published earlier, and his work in science shared with scientists that came soon after the Renaissance rather than centuries later, there is no telling what scientific advances might have been made sooner. But, alas, that was not the case, and his notebook pages were lost to many who might have benefited from his scientific work.

In the realm of art, Leonardo stood as one of the greatest artists of his day, in spite of actually completing only a fairly small number of paintings. It is likely that his perfectionist tendencies contributed to that low number, as well as his frequent “distractions” by work on math or science.

As I learned more and more in my early studies of da Vinci, it was exciting to be sharing that enthusiasm with students of a wide variety of ages.  Even as I taught those first classes, I worked on my first non-fiction work about him. After six months of research and three months of teaching, I had written a short, but comprehensive, family-friendly biography of Leonardo da Vinci – Da Vinci: His Life and His Legacy. But that, as they say, was just the beginning. I was hooked!

The more I knew about Leonardo’s life and his work, the more I wanted to learn. Even after completing those first classes, I continued to read dozens of books about da Vinci, visited exhibits in various parts of the country about him and his work, and eventually made two trips to Italy to visit many of the places he had lived. 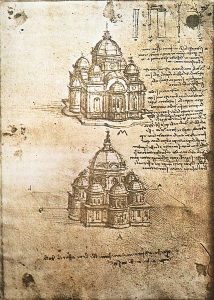 And, as always seems to happen when I am engrossed in a topic, I wrote. The next book I wrote him was another non-fiction book – Doing Da Vinci for Kids. And then I kept learning and kept writing. (For more information on books I’ve written on Leonardo da Vinci, you can go to this page.)

But it would be many years and many classes later before I tried my hand at writing fiction. One summer I was at the Creative Learning Connection booth at a curriculum fair conversing with another author who had just completed his first novel. I mentioned, more in conversation than anything else, that I had considered writing a novel someday. He looked around my booth and stated matter-of-factly, “You should write about something you know. I think Leonardo da Vinci would fit that description.” 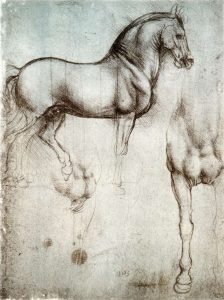 Going home from the curriculum fair I casually mentioned the idea of writing historical fiction about Leonardo da Vinci “some day.” But my children wouldn’t hear of it. Several of them quickly insisted that I start right then, not later. And with some prodding, that’s exactly what I did.  Within a month I had written my first historical novel – Leonardo the Florentine. It would be several more months before I had found an editor for the novel and gotten it published. I’m not sure what was more exciting, holding that first paperback in my hand, or the recent release of Leonardo the Florentine as an Audible book. Both were pretty amazing! 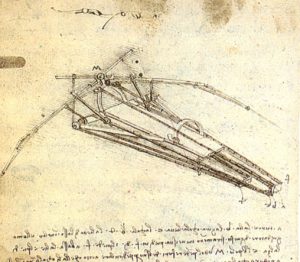 In May 2019 the world will celebrate the 500 year anniversary of the death of this great Renaissance man. My goal is to have my historical fiction series completed by then, meaning at least three more novels. In the meantime, I will continue to research him, continue to write about him, and continue to fall in love with Leonardo da Vinci.

And I hope I have managed to share just a little of that passion with you!