Working on My Da Vinci Series

I’ve been hard at work this summer on the next novel in my “Life and Travels of da Vinci” series. With the 500-year anniversary of Leonardo’s death looming in the relatively near future (May 2019), I’m doubling up my efforts to complete my da Vinci series by then.

In my earliest years of novel writing I was able to complete an average of one novel per year. (These are relatively short novels, technically more “novella” size, so one per year with everything else I was doing was generally attainable.) I kept that pace fairly consistently for the first four novels: Leonardo the Florentine, Leonardo: Masterpieces in Milan, Leonardo: To Mantua and Beyond, and Leonardo: A Return to Florence. But I slipped a little between the fourth and the fifth, not completing Leonardo: A Return to Painting until this past spring, more than two years after the previous one had been finished.

By my current calculations, there should end up being at least nine books in the series by the time I’ve completed it. Which means starting this year I will need to write more like two books per year to finish in time. Again, considering the lengths of these books, and the fact that as of January 2017 I am now semi-retired, this should be completely doable.

One of the things I love about self-publishing my books is that I get to set my own goals. (Of course, as the two-year gap shows, sometimes goals where you only answer to yourself can get away from you!) But typically, I’m better at setting goals that I can attain, and actually meeting them. 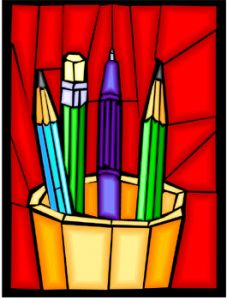 I can easily write 1,000 words or more each writing day. (On good, productive days I often hit more than 2,000 words, and when the story is clicking I’ve done as many as 3,000 – 4,000 words.) Considering my last da Vinci novel was the longest, and it came in at only 42,000 words, you can see how writing the first draft isn’t a long process when I’m working on it daily. (Six days a week is my goal during the peak of a “writing season” for me.)

I’m almost half way through the rough draft of this next story, hitting 21,000 words in just over three weeks. I’m allowing myself the next two weeks as a break from writing for two reasons – to do some more research for a few parts of the story and to spend more time with the children and grandchildren who are visiting. 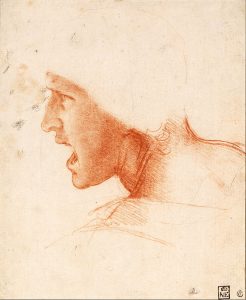 One of many sketches Leonardo made for the battle mural.

It’s exciting to see the story develop before my eyes. I knew where the story would begin – basically where the last one ended: Leonardo had just walked away from a large mural he had been painting for the Florentine city fathers. There was a large disaster involving the paint he had used, and the painting was effectively destroyed. What Leonardo (and the city fathers) would do next was a huge concern. (And became a bigger concern when they threatened to sue him for breach of contract.)

All of that was a known part of this next story that I’m writing. Along the way to researching and writing those portions I have found several other interesting events during that time period in Leonardo’s life: He built a model for a flying machine that he tested with one of his apprentices; he was threatened with a lawsuit for an altarpiece he had painted in Milan twenty years earlier; and he was asked to assist a good friend in Florence with a set of life-size sculptures for the Florence Baptistery.

Learning enough about each of those events to weave them into this story is my current project. As with all my historical fiction, I want to have as many of the facts as possible, while still trying to make an interesting story.