Enjoying the Journey – In spite of the D.C. Metro Management 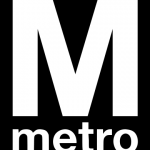 I have traveled alone, with friends, with family, and with students. Traveling to D.C. is something I have enjoyed often with one or more of those groups, even though I live almost 700 miles away. And on almost every of my sixteen or more trips (spread over the last fourteen years) I have taken the D.C. metro in and around the city.

Until this last trip (April 2017), our metro experience had been pretty flawless. Park at the end of the Orange line (since our friends live closest to that), buy our tickets or our passes at the machines at the station, and take the subway into the city. (I’ll use the terms “metro,” “subway,” and “train” interchangeably here, since, at least in these contexts, they are fairly synonymous!) 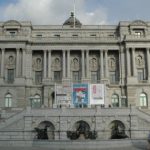 The Library of Congress

But the metro took on a whole new meaning of difficulty on the second day of our recent trip. On Day 1 (a Friday), things were about like I expected them to be. The friends we were staying with are now about 15 minutes closer to the end of the Silver line than the Orange, so we parked at the parking garage at Wiehle-Reston East and took the Silver train straight to the Capitol South station. Easy, direct, relatively fast – pretty much what I expect when I take the subway in D.C. The ride in took us about an hour, but it was an easy hour. 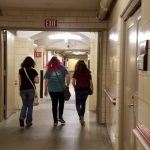 The girls walking through the tunnel on the way between Library of Congress buildings.

Fortunately, when we were exiting the subway, we noticed the signs in the Capitol South Station that spoke of a closure on Saturday and Sunday. At first, we thought it was only that station that would be closed. And since we weren’t planning to be in that portion of the city on our next two days we originally thought the closure wouldn’t affect us. Boy, were we wrong.

Fortunately, Friday evening/Saturday morning we studied the “Disruptions” portion of the “DC Metro transit” app (an app that no one should be traveling the DC subway without!). So, with the forewarning of the signs on Friday and the app on Saturday morning, we were at least prepared for some of the craziness that Saturday’s metro mess brought us. (Though there was no way we could have been prepared for all that awaited us on that crazy day!)

On Saturday, we drove back to the end of the Silver line. As we boarded we realized that the announcements about the various closures for the day were catching lots of the other riders off guard and we were glad that we had at least known some things were going to be amiss.

When we boarded the Silver train we already knew that we could only go as far at the Ballston-MU stop. Why there, you might ask? Because the Metro powers-to-be had decided to close the Silver line past there for the weekend. (Reportedly for repairs, though for the life of me I don’t know how or why they could be repairing as many different places as were closed that weekend.) And, the next section we were on was the same one we would have been on had we been able to stay on a Silver train – so I’m still not quite sure what they were repairing that entailed that first change. (The trains themselves?)

So off we went at the Ballston MU stop to transfer to the Orange line. No problem, the Orange line could take us to where we wanted to go. Well, normally, yes. But that day the Blue and Orange lines were only going as far as Foggy Bottom. More repairs? Apparently. 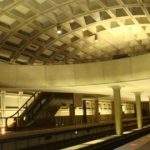 Inside another Metro Station

But have no fear, the Metro folks had it well in hand – they were providing free shuttle buses from Foggy Bottom to Federal Triangle. (Too bad for those who just wanted to go to one of the several stops in between!). So, after standing in the sun for 15 minutes or so, we were crowded onto a shuttle bus to stand for the majority of the 45-minute drive to the Federal Triangle stop. (Later we determined there were less than two miles of roads between those two locations. But between traffic and road closures for that day’s protest march, those two miles took a full 45 minutes to drive.  (Had I been up to the walk, we could have hiked between the two spots quicker than that; but alas, not on this trip.)

The shuttle bus driver didn’t seem particularly keen on getting us the entire way to the Federal Triangle stop (more construction issues?) but seemed to just drop us off when we were in the vicinity. In our case, it was fine, because we had decided not to get back on the subway, but rather to just walk the few blocks to the Reagan building where we had decided to lunch in the Food Court. But for any who were planning to get back on the subway at Federal Triangle, they were left to figure out where they were and which direction the subway station was from where they had been dropped off. (So much for a station to station shuttle!) 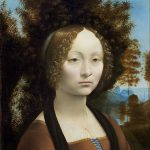 Leonardo’s portrait of Ginevra de’ Benci – the main reason I take students to the Art Museum!

After enjoying our overpriced meals in the Reagan building (we miss the food court in the Old Post Office building), we went off to enjoy the afternoon plans. (Well, there was a delay in going to see the White House that involved a run in with the weekend’s protest group, but that’s a story for another day.) Suffice it to say that we enjoyed the remainder of our afternoon – at the National Archives and the National Museum of Art. We had originally considered going back up the block to the Natural History Museum, but our travels into the city had eaten up so much of the day, that when we exited the art museum at closing time, we were ready to start our journey back out of the city – though not particularly anxious for what the experience would hold for us.

We walked up 7th Street to the Archives Station. From there it was a short hop down to the L’Enfant Plaza Station where we would normally have been able to hop on a Silver train for the ride back out of the city. But, of course, it wasn’t so easy on Saturday. We took an Orange train to the Federal Triangle stop, where we had to go back up to the mass of Shuttle Buses that were waiting to take us back to Foggy Bottom. The wait for a bus wasn’t particularly long this time, there were actually a large number of them lining up by the street. The problem was that they were once again crowded and we were looking at another long ride of standing up. When we realized that, we stepped off enough from the line to let others on who could handle the standing go ahead of us. Once that bus was full, a gentleman graciously let us back in line, thus ensuring our ability to sit this time around.

We were thankful for the seats for that portion of the trip, because when we got back to Foggy Bottom we were forced to stand again, this time while we waited for an Orange train that was in no hurry to get there. And of course, we could only take the Orange line back to Ballston-MU, where we got to stand yet again for another lengthy wait. (I am fairly certain that wait was almost 45 minutes.) When the Silver train came at last there was actually cheering in the station, something I’ve never heard during any of my countless trips on the subway. 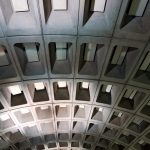 I do like the ceilings in some of the underground metro stations.

By the time we finally reached the end of the Silver line, we had been traveling back for almost three hours (yes, that would be almost three times as long as the longer trips in and out had taken us the day before). And since most of the subway stations have a deplorable lack of benches, way too much of the time traveling to and from downtown D.C. had involved way too much standing. (A bigger problem for my injured knee than the walking we had known we would be doing.)

Late that night we started working out details for how Sunday was going to look. Thanks to my daughter Maria, we made a couple of key changes to our transportation plans. (Because, yes, the subway issues from Saturday were all still prepared to plague us on Sunday.)

The first change we made was the decision to make the drive to the end of the Orange line – Vienna/Fairfax instead of going to the closer Silver line. The extra drive added about 15 minutes to our drive time and another $5.00 to our toll fees, but it saved us from having to make what had been the longest of our transfers the day before (from the Silver to the Orange).

The next change we made was to our route, so that we could skip the bus transfer portion. (The least favorite part of the previous day for most of our group.) It made for significantly more subway changes, but overall it still seemed easier! We took the Orange Line to Rosslyn, where we picked up the Blue line. Two stops later we were changing to the Yellow Line at Pentagon. We took the Yellow line three stops to Gallery Place where we picked up the Red line for our last leg – two stops to Union Station. (Had we made the same trip on Friday, we could have taken the Silver line to the Red line, and done all that with one transfer!) But we still managed all that in an hour and a half instead of almost three hours! 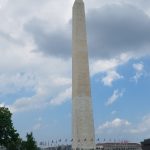 Hard to get lost on the Mall – which way to the Washington Monument?

After lunch at the Union Station Food Court (much cheaper than the previous day’s) we made our way to the Mall and spent a few hours touring the monuments and memorials there. By 4:30 we were ready to face the Metro yet again. We were only about half a mile from the Smithsonian Station, so we made our way there. Had the subway system been fully operational we could have gotten on the Orange or Silver line there and traveled straight to the end of either – in 45 minutes or so.

But again, not this weekend, that was not the case. Instead we had to get on the Orange line heading away from our destination. Then we were reversing our earlier route: Yellow line from L’Enfant Plaza to Pentagon, Blue line to Rosslyn, and then the Orange line back to Vienna. And, at an hour and a half, while the the trip was probably twice as long as it should have been, it was still barely half of what a similar route had taken us the day before.

So, all in all, we can certainly say that we survived the madness of the Metro. But I’m not sure how many of the city’s first time visitors will be in any hurry to return. While I fully understand the powers-that-be not wanting to cause this much disruption on work days,  do they risk driving away significant numbers of tourists (and tourist dollars) in the process?