Leonardo da Vinci lived at a time when people did not specialize in a particular area, like we tend to do today, and his life showed that trend clearly.  I started researching da Vinci almost ten years ago when I was going to teach a co-op class on him.  I have been studying him on and off since then!  One of my biggest frustrations as I have taught and studied da Vinci has been the shortage of family-friendly materials on this important topic.  From that frustration and almost a decade of study, has come a variety of non-fiction books and my first novel.

Leonardo the Florentine (a novel)

Leonardo: Masterpieces in Milan (a novel)

The first books I wrote were non-fiction books, and those still remain at the top of the list of books I’ve written. During the summer of 2010, with some encouragement from another author, I finally decided to try my hand at my first historical novel.   A month later the rough draft of my first fiction work was written, Leonardo the Florentine.

I had actually started the second novel about  Leonardo da Vinci almost as soon as that one was started.   Leonardo: Masterpieces in Milan is a family-friendly novel of Leonardo da Vinci’s many, productive years in Milan. Follow Leonardo as he works for the Duke of Milan, paints the Last Supper, studies architecture, and much more! This book picks up where Leonardo the Florentine left off, but they can be read in any order!  A good read for families or for individuals who want to learn more about the master!

After what has felt like much too long, book five in the “Life and Travels of da Vinci” series is finally done! Leonardo: A Return to Painting is now available for sale on Amazon. The Kindle book is up and the paperback should be available soon. At almost 40,000 words, this is my largest novel yet. I know, I know, as adult novels go, that’s not long, but I don’t write adult length novels! I write family friendly novels that can be enjoyed by students and adults.

This novel is exciting because I finally get to tell my story of how Leonardo came to paint the Mona Lisa, and why he still had the painting with him when he moved to France in 1516. Of course, since this is Leonardo we’re talking about, he wasn’t just painting the Mona Lisa, he was also working on a wall mural more than double the size of his Last Supper, and trying to divert the Arno River in his spare time! This novel covers those and much more. 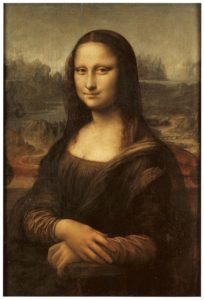 Da Vinci: His Life and His Legacy

From the Introduction: What makes this book different from others about Leonardo?  Why take on a project like this, when so many others have already been written about him?  Because, most books I read that were geared for kids had very little information, and those geared for adults generally had too much.  I have tried to make this book complete enough to give a good picture of who Leonardo was and what he accomplished, without overwhelming my readers.  I have tried to make it interesting for those who may know nothing about Leonardo, and yet still interesting for those who already know quite a bit!  I have also attempted to make it interesting enough for a wide range of ages — from kids of all ages through adults.

And I have attempted to place Leonardo in a framework of history and geography, so that we can more easily understand his accomplishments.  The books I read about him often referred in passing to where he was and what was going on around him – without giving sufficient information to understand how those locations and events affected him.  I have attempted to fill those gaps.
May we ponder the man, the works, and the accomplishments behind the stories of Leonardo da Vinci.  May we be touched in some small way by this “Renaissance Man”.  And may we gain a better understanding of the times in which he lived.

I’ve been studying and teaching Leonardo da Vinci for many years.  This book is my attempts to bring da Vinci to students of all ages, but particularly younger ones.  It includes pictures of many of da Vinci’s drawings, Word Searches, and quotes, all arranged around a variety of topics relating to Leonardo da Vinci’s great achievements, including his Horse, his studies of the Human Body, and many more.

Doing Da Vinci can be used as a stand-alone book, or in conjunction with the non-fiction look at Da Vinci’s life, Da Vinci: His Life and His Legacy.

We’ve simplified our Leonardo Lapbook.  Instead of the complicated, two-sided booklets it used to contain, it now contains 4 cards for each of the various topics:  Horse, architecture, math…, as well as a timeline, maps, etc.

As with our other lapbook kits, we do not included detailed instructions, but we are confident you and your students will find fun ways to arrange these pictures, timeline, map, and more.

You may also enjoy my blog posts about da Vinci: