As happens so often, I have changed directions on this week’s blog post. Hopefully, my previously planned topic will appear in a future post, but not this week.  Almost exactly a year ago, I wrote a post, Celebrating 35 years of Homeschooling, 40 years of Parenting, 60 years of Life, on my other blog, at www.CreativeLearningConnection.com. I did not expect that I would be writing a follow up post here on my author’s blog, but that’s exactly what I’m now doing.

Last year’s post came as a result of a video my children surprised me with for my 60th birthday.  The video was unexpected, to say the least, and was an amazing blessing as my children shared some of their favorite memories of growing up with me. (They were kind enough to leave out any unpleasant memories they may have.)

I would really have thought they couldn’t top that surprise/blessing. But they managed. This year, on the Saturday before Mother’s Day, when I thought a dozen of us were going out to an early Mother’s Day luncheon, I found myself at our church surrounded by a very large group (about 50, by my best count) of family, friends, students, and former students, to celebrate my “retirement.” The brainchild of one of my children, “Saying Thank You to Catherine Jaime” was like the previous year’s video on steroids. 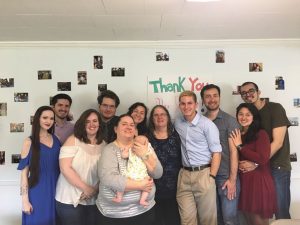 My daughter had managed to interview dozens and dozens of people I had interacted with during the last three plus decades as  I homeschooled, taught class after class, and coached team after team of mock trial students. As I watched the audio/visual presentation she had so carefully put together, I was brought to (happy) tears yet again.

And the timing could not have been better. In less than a month I will be attending my husband’s 40th reunion at MIT. (I attended MIT also, but my 40th isn’t until next year.) I have been to numerous reunions over the past 40 years and have always enjoyed getting together with our friends there. But, sometimes, I have to work hard to make sure I’m not falling prey to second thoughts on how I’ve spent the last (fill in the blank, depending on the reunion) years.

I didn’t follow the same career path as the vast majority of my college classmates, choosing instead to primarily stay home and raise/homeschool my children. Of course, as our little party on Saturday showed, my version of staying home and raising my children probably didn’t look like most other people’s version for several reasons:

In fact, last year when I was closing down my homeschool resource center, Creative Learning Connection, I often heard the “What will you do now?” question. I usually answered: “Travel more and write more.” People that knew me well often questioned how I could do more of either, but I have!

So, just like the last 40 years of my life didn’t fit most people’s expectations, it’s likely that my future years (how ever many God blesses me with) will not look much like that of most of my peers (but why should I start now!).

I have officially passed on the mantle of Government Club Advisor/Coach/Mentor to family members for next fall. (Scheduling two cruises for that time of year sort of forced the issue.) And I’m more or less retired from teaching classes now (though I’m not sure the students who will be at my house in a couple of days for Shakespeare will believe that). 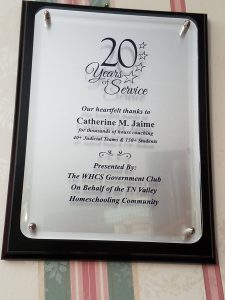 But I’ll settle for the fact that I’m semi-retired for now. And as I move into this somewhat new phase, I will be looking back on Saturday’s event with great pleasure. In fact, the real fun of watching and listening to the presentation was seeing how many people gave similar answers on how I had impacted their lives – most had to do with travel, or Mock Trial, or both, with some general homeschool encouragement and Shakespeare thrown in there for good measure. And considering my favorite memories of the last 40 years revolve around pretty much those same things, it was cool to hear others sharing my sentiment. 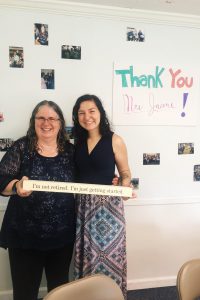 I think the saying in the little plaque I received as a gift, says it well, “I’m not retired. I’m just getting started.”

Now, off to help at a homeschool graduation, and then back to trying to finish that Michelangelo book I’ve been trying to write since the beginning of March!