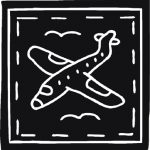 I love to travel, I really do! And I want to enjoy the journey as much as the destination. But, when I have to fly somewhere, the journey becomes more of an endurance than an enjoyment. I’m not afraid of flying, I just don’t particularly enjoy it. The seats are getting smaller and closer together. And then there’s the “fun” of the airports themselves – with the long walks between terminals (give me Atlanta over Charlotte or Philadelphia any day!) And let’s not forget the ongoing security headaches. 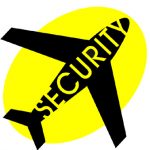 If, like me, you are old enough to remember the ease of pre-9/11 flying, these headaches feel all the more real (and painful!) While we all have some understanding of the importance of the increased airport security, it is easy to long for the “good old days” of flying when all of this didn’t take so long or feel so intrusive.

Since I was renewing my passport last January, I decided it was a good time to apply for one of the programs designed to reduce some of the hassles of flying.  Since I generally fly overseas at least once a year, it wasn’t difficult to spend an extra $15 for the more encompassing Global Entry than the solely domestic TSA PreCheck ($100 for 5 years versus $85).

In a previous post, Tips for Packing Light and Traveling Smart, I spoke a little about my decision and the process of applying for Global Entry. At that point I had obtained my “Known Traveler Number” but I had only had a chance to use the TSA PreCheck portion of it.

But now that I’ve made my first overseas trip since getting Global Entry, I just have to share! 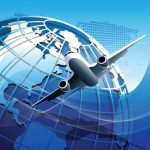 I had been under the impression that having Global Entry would save me some time reentering the country when I flew. Oh my, it was better than I had expected.

Four of us from our group were traveling back to the states together through Philadelphia – two of us had Global Entry and two did not, so we split up to go through the various security portions. The two without Global Entry got in the back of a very long line and the other two of us walked up to the section with several kiosks and very few people. Within minutes we had processed through those and were on our way to the Baggage Claim section to await our luggage. More than twenty minutes passed before the other two caught up with us there.  I was already happy with my decision to spend the time and money on Global Entry, and we weren’t even done yet. 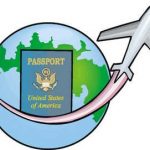 Full Disclosure: Most of the time we saved going through the kiosks instead of the longer line was then spent waiting for the bags we had chosen to check. Had we just had carry-ons that would have been a true time savings. But the real gain for me was the ability to sit and wait on the bags, rather than standing in the crowded lines – a painful experience for me with my injured knee.

With luggage in hand we headed to the next lines, again splitting between those with and those without the special privileges. The lines there were closer in length, so we probably only saved 5 minutes or so going through the passport check portion.

From there we had to return our luggage to American Airlines for our next flight, and our special status didn’t save us anything – though again, by then the lines were moving quickly, and none of us waited long to get through that portion. 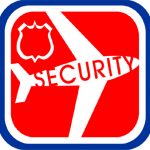 But then it was time to pass back through security – this time the lines split being TSA PreCheck and non-PreCheck. Two of us were off to the PreCheck line. At first glance the PreCheck line actually seemed longer than the other one, but when we turned the corner we discovered that the non-PreCheck line was significantly longer. This time we probably saved an additional five – ten minutes, possibly more.

To say nothing of feeling like I’m being treated like a real human being when I go through the PreCheck line – the shoes and the sweater stay on, and the CPAP machine and liquids stay in their bags.  Small, but important improvements to my security line experiences! (And since Europeans don’t make anyone take their shoes off going through security – I actually traveled both directions on this trip without that hassle – what can I say, sometimes it’s the little things in life!)

All told I probably saved a half hour or more on my first international trip with the Global Entry perks. And while that may not be a huge time savings for some people, the fact that I was traveling with an injured knee made me appreciate every minute I wasn’t standing in a line. 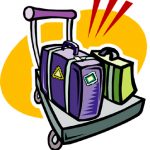 One last comment on this recent trip. Of the six of us in our group, five had been on numerous cruises, and one was a first timer. Amongst us we had five carry-on size suitcases and one much larger suitcase (want to guess which member of the group that belonged to?). As we dragged our luggage through Venetian streets and across canals, both before and after the cruise, and on and off buses and water buses, we were glad that no one had brought two suitcases, and that our bags were generally small. 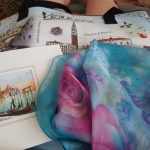 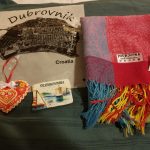 I had planned to bring my bag to Europe as a carry-on, and then check it on the way home. That is my preferred method for international travels – since it ensures my luggage joins me on my trip, but makes things a little easier on the way home. I don’t buy alot of souvenirs (see examples from two of the cities I visited) but I buy enough that it’s nice to be able to expand the bag a bit to accommodate them. On this last trip, American Airlines had other ideas – instead of gate checking my bag on my second small plane of the day, they insisted on checking my luggage all the way to my final destination – convenient – until my bag didn’t show up with everyone else’s in Venice. (It finally did arrive, but not until all the others had long been there, and my stress had risen more than it should have.)

What do you like most and least about flying?