In the last post I talked about the importance of packing light and promised to talk more about my journey to find a good carry-on. So, here we go with my latest suitcase search!

In the last decade or so of travel, the luggage I use has become more and more important to me. With the growing hassle of checking bags – the risk of having a bag lost, the wait time at the baggage claim area, and generally higher cost (though not on Frontier Airlines I recently discovered), I almost never check a bag anymore.

I occasionally make an exception on the way home from a trip, if I won’t be paying for it (i.e. international flights) and when a delay in getting the bag won’t be so detrimental. (Though even then a carry-on makes me the happiest.) 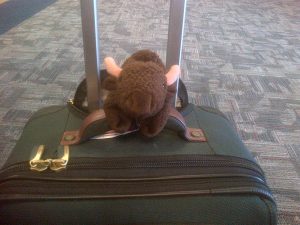 On a recent flight home from Denver, I had considered checking my bag so I wouldn’t have to mess with it on the plane. But when I got to the airport, there were literally 100 or more people in line at the counter, with two agents to check them all in. There was no way I was standing in that line! I was glad to have the option to just carry it on. (I had chosen to purchase Frontier’s “The Works” package when I had made my reservations – giving me a better seat option, and the ability to do a carry-on suitcase and/or a checked bag – all for a price I was happy with.)

So, I walked by the insane line and made my way straight to security. I had downloaded my boarding pass onto my phone the night before when I checked in, and had chosen to add the carry-on option, “just in case” I didn’t have the time to check my bag (or in this case, the desire to check it!)

Speaking of suitcases, with all my travels, I’ve gone through several in the last few years. My first splurge on a carry-on was when I bought an American Tourister over ten years ago – and used it until it was falling apart. It was a great bag, the first carry-on I had spent any significant money on (probably $100 at the time). Had I been able to find another bag just like it, my search for another suitcase would have ended right there.

Unfortunately, the store I bought it in was no longer selling luggage, and I’ve never been able to find the same bag. (And my research into luggage has shown me that with companies like American Tourister, not all their bags are created equal, so I’ve not convinced myself to purchase another one of theirs.)

As my search for a replacement bag continued, I decided a couple of years ago to try a Rick Steves bag. I went with the Rolling Backpack – thinking the ability to wheel it or carry it might be worth trying. I took the bag on my second trip to Italy, and did use it as a backpack occasionally as we traveled from city to city. But after using it on several trips, I decided I didn’t really care for the bag – I had difficulty putting something on top it (a totebag or my CPAP bag – both continually tried to slip off). So when I had the chance to pass it off to one of my children, I willingly gave up that bag and moved on to another attempt. 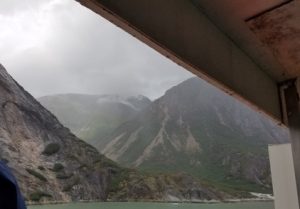 One of my most recent trips with my SeatKase was a cruise to Alaska last summer.

My next attempt at a good, useful carry-on bag was the SeatKase. Like the Rick Steves’ bag, the SeatKase is small enough to be used on international flights (not all carry-on bags are). And I liked the idea that you can actually sit on the SeatKase without messing up the suitcase or having it roll away from you; an option that I have used on several trips. (It’s amazing how often there are not enough seats in international airports, or how long one has to wait in line at some cruise check-ins.) So, that feature, which was the primary reason I had bought that particular bag, is really nice. However, the main downside to the SeatKase is the lack of a handle on the top of the bag. While I understand the design issues a top handle might cause, the lack of a handle there is a constant headache. As soon as I get a good replacement, this bag will be the next one to be passed on to a child or someone else in need of a bag.

Meanwhile my husband has purchased an eBag carry-on, the Mother Lode 21” Wheeled Duffle. He has been very happy with it on numerous international trips in the last year and I almost got myself one of those. But I had really hoped to go back to a bag with four wheels, so I kept looking. (My American Tourister bag had four wheels, but the Rick Steves and the SeatKase bags each only had two.) 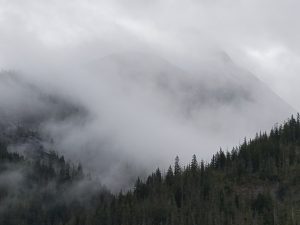 Pack light so you can enjoy your travels more!

During my search I was very impressed with what I read about the Eagle Creek line. They have a great, life-time guarantee and their prices are more reasonable than the highest rated brands.

I liked the looks of their Eagle Creek Expanse Awd International Carry-on. Everything about it sounded great. When it came in, I was definitely impressed with its quality. I can see how they can afford to give a lifetime guarantee. But, when all was said and done I made the decision to send it back. I want to pack light. However, this bag is just a bit too small. I was able to pack 4 days worth of clothes into it, but that left NO extra room. I certainly could make use of it several times a year for my long weekend trips. But I don’t see being able to use it for my international trips.

Fortunately, while I was ordering the Eagle Creek my husband was ending up with a second eBag Mother Lode. The airlines managed to snap the wheel off his almost brand new bag and had to repair it. But, with a trip coming up too quickly, he had to order a second bag, rather than wait for the damaged one to be returned.

All that turned out to be providential, since the repaired bag showed up about the same time as the Eagle Creek bag. So, when all is said and done, I am now the proud owner of a gently used eBag Mother Lode. I look forward to taking it on many, many trips, starting with my trip to Washington, D.C. this past weekend. But on loading the car Thursday morning I was saddened to discover that there is no side handle on this bag. While that is not as big a pain as not having a handle on the top – it does make me wonder if my search for my new favorite carry-on is actually over, or just delayed for the time being.

Any thoughts on a reasonably priced, quality carry-on that I’ve missed are greatly appreciated.

In the meantime – happy traveling!