A friendly reminder (that I think I failed to add to the last post here!) that I’ve recently changed to one blog post a week instead of two – so a new post should appear on this blog every other Monday, and a new one should appear on my other website, www.CreativeLearningConnection, on the alternate Mondays. 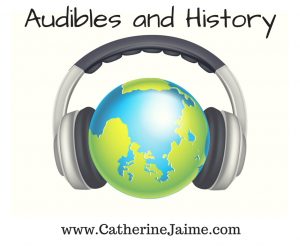 Two weeks ago I did a post on Audibles and history (a topic that combines two of my favorite interests!). And I really thought I would be going a totally different direction with today’s post. But as so often happens, my plans got modified along the way. (One of the many reasons I very seldom taught from any sort of pre-done syllabus, and even when I did, it always got changed before the semester was out.)

Hurricanes – Recent and Past

This week’s change is for a variety of reasons. First the quick background. I just returned from my latest cruise (this was my 10th, maybe I’ll do an entire post on why I love cruising so much, but, clearly, no promises on when!). We sailed out of Galveston, Texas, just a couple of weeks after Hurricane Harvey came through that general area and did some significant damage (more in the area of Rockport and Houston than Galveston itself).

I mentioned my then upcoming trip to a woman at the pool just before we left.  She asked if I had ever read the book, Isaac’s Storm. I had not and she strongly encouraged me to do so. As I so often do when people recommend books to me, I went looking for it on Audible. It was there, I immediately purchased it, and downloaded it to my phone just before the trip. I thought maybe I could convince my daughters to listen to it as we traveled to or from Texas. Sadly, they weren’t as interested in it as I was and I didn’t get a chance to listen to it until we returned home last week.

But, since I managed to come home fighting a losing battle against a cold, I actually had plenty of time to listen to the book while I was spending lots of time in my room (trying not to share my germs) and without much energy to do much else. 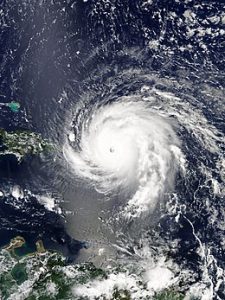 In the midst of all the recent damage done by Hurricanes Harvey, Irma, and Maria, it was fascinating to listen to the story of the 1900 hurricane that almost destroyed Galveston, Texas. The story gave me much more insight into to what those in the path of the recent storms would have suffered though during the hurricane itself and what many of them are continuing to suffer through in its aftermath.

The author, Erik Larson, does a good job bringing to life the days leading up to the hurricane, as well as making a reader feel the pain of those who were in Galveston on that fateful day. The subtitle of the book, A Man, a Time, and the Deadliest Hurricane in History, gives a good idea of what the book is about.  As Mr. Larson explains so well in the book, in the year 1900 Americans thought they were on the top of the world in almost every imaginable category – including weather predictions (even though the Weather Bureau was a brand new entity at the time, with very little practice at accurately predicting storms such as this one). 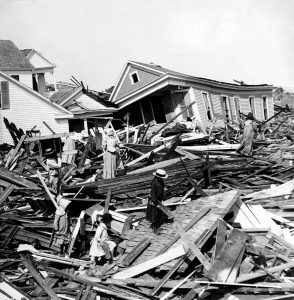 After the 1900 Hurricane in Galveston

If you read or listen to the book, give it a little bit of time to get going. Mr. Larson describes his book as “a historic narrative” (and I honestly never determined whether it was classified as historic fiction or non-fiction), and he does spend some serious time in the beginning setting the stage for what occurred. My biggest complaint was not actually that, but the going back and forth between the time period just before the storm and much further back, when he gives us some of Isaac’s background including his time in the Signal Corps (the original weather folks). As an author, I can understand Mr. Larson’s desire to get readers hooked right away with the storm itself, but as a reader I prefer things laid out in a more straightforward manner. (But, really a small complaint about a very informative and interesting book.)

Isaac Cline was a late 19th/ early 20th century scientist and meteorologist who thought he had a true grasp of the limitations of nature. Living and working in Galveston before the hurricane struck, Isaac was one of many who that it impossible that a hurricane could do any significant damage to his city. His attitude before and even as the storm began reminded me a lot of the attitudes about the Titanic that would contribute to that disaster a mere twelve years later. But to put those two disasters into perspective, less than 2,000 people died when the Titanic hit the iceberg and more than 10,000 people died when the hurricane hit Galveston. (And it can be argued in both cases, the foolishness of men to take the true dangers into account made those numbers much worse than they should have been.)

If you like history, have an interest in storms, and/or want to better understand the physical and economic effects of the hurricanes that just roared across the Caribbean and the Gulf of Mexico, I can strongly recommend Isaac’s Storm.