I had started another blog post for this week. But when I thought about what date it would be published, I changed my mind. The other topic can  wait.

The Assassinations of the 60s

It’s always interesting to recall where we were and what we were doing when certain key events happened.  I’ve talked to people from my generation that remember some of the assassinations from the 60’s that way – JFK, Martin Luther King, Jr, or Robert Kennedy to name a few. I was in the Canal Zone (Panama) when John F. Kennedy was killed and have no recollection of that.  Based on when we moved, I must have been in Massachusetts when King and the younger Kennedy were shot, but I don’t recall either of those.

But I do remember where I was and what I was doing when the Challenger Shuttle exploded and when 9/11 happened. In fact, both of those times I was home with my children, and my husband called me from work to tell me the news. Before the Challenger explosion my family had actually watched the live broadcasting of several shuttle liftoffs, but “happened” not to be watching that one. I was thankful that I was able to give the kids some information about what had happened before we turned the news on to see what they were discussing. I’m sure we spent most of that day watching the news as they tried to analyze the tragedy that had just occurred.

The television was also off when the first airplane struck the tower of the World Trade Center on 9/11. After my husband called, we prayed for the people in the tower, and then like so many other people across the country, turned the TV on and tuned into the news. And like so many others, we were watching when the second tower was struck, and we were watching when the towers started to collapse. We spent much of that morning praying for those who had been injured, those who were trying to get out of the towers (as well as those who were rushing in to help), and the families of the increasing number of people who were dying that day.  I think it would be safe to say that 9/11 brought our country to its knees – to the knees of those in prayer.

People Who Were Directly Affected 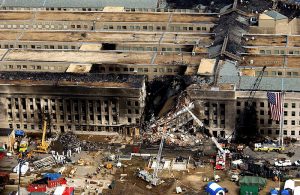 It would be several years before I would actually speak with people who had been in D.C. and New York City when the attacks happened.  A good friend in D.C. was in the Navy at the time, and working at the Pentagon. She was actually away from her office, and returned right after the plane had struck.  But when I visited her in D.C. a few years later we dined with another Navy friend who was at the Pentagon that morning. In fact her office was very close to where the plane struck. I listened intently as she described their hasty departure from the building, and the massive amounts of damage that had been caused. And, of course, she knew many of those who died in the Pentagon that morning.

Many years later I attended a dinner in New York City connected to my son’s graduation from law school. There were several people at our table that evening that had been in New York City on 9/11. They described the chaos in the streets and the debris in the air as they ran with countless others away from the disaster.  Many lives were lost that day, and many others were forever changed.

The Smoke Could Even Be Seen From Space

When I was looking for some pictures I could use for today’s blog post, I ran across many that I was familiar with, photographs of the towers on fire and of the aftermath. But I also discovered a photo I had never seen before – the one taken from the International Space Station (ISS) showing the smoke from the towers that the astronauts could even see from space. The ISS Commander, Frank L. Culbertson, wrote that day: “The world changed today. What I say or do is very minor compared to the significance of what happened to our country today when it was attacked.” 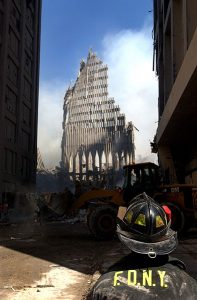 Sixteen years have passed since that tragic day, and it is very easy for those of us who were not directly effected by that day to forget. (My oldest son was unable to fly back overseas that day after flights were cancelled and I had to pick up my niece at school that day when the schools choose to release students early). Other than that we were only impacted as Americans.

And today, sixteen years later, I have students who only know of 9/11 as part of our country’s collective history – but they have no personal memories of that day.  I hope that as a nation we can keep alive the memories of those who perished in those attacks – particularly the first responders who willingly ran towards the disaster rather than away from it.

Praying for those Affected by the Hurricanes and 9/11

Today with much of our country’s focus on the current path and recent damage of Hurricane Irma (and Harvey), may we also remember those who’s lives were forever changed by 9/11.