History Along the Road 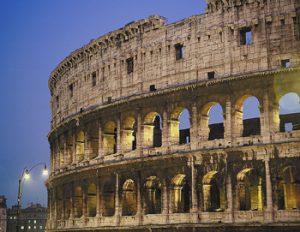 Even in the early 1500s the Colosseum was in ruins.

The Joys of “Being There”

As I mentioned in a previous post, I have been a history buff for decades now. And while I love reading (and then writing) about history, particularly historical fiction, nothing beats being where history took place. And for any that know us, it should come as no surprise that my family tends to take that concept to extremes. I’ve crossed the Old North Bridge in Lexington where the British and Colonials fought in the early days of the American Revolution more than 200 years ago; I’ve stood in Jamestown where John Smith and the other settlers had been 400 years before; and I’ve walked the streets of Rome pondering both Leonardo da Vinci and Martin Luther having walked those streets almost 500 years before me. (The title photo is from a visit to the underground cities near Cappadocia, Turkey – cities that date back more than 1,000 years. That visit started me off on my first historical short stories.)

Historical Journeys with the Family

Several years ago, seven members of our family followed the Lewis and Clark trail for almost two weeks. It was amazing to be in various places along the route where those men (and the one woman) had stood almost exactly two hundred years before us. 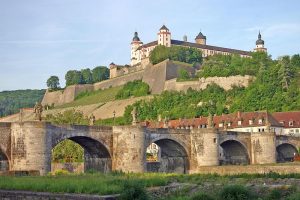 The castle near where we lived in Wuerzburg, Germany.

When my family was in Germany many years before that, my children were quite confident that they had been to every castle in the country, though of course, they had not. But we had certainly seen lots – and every one of my kids had a pretty good idea of what life was like in the Middle Ages in Europe as a result.

Once we returned to the states, we took a family trip along the east coast that involved stops at numerous civil war and revolutionary war sites. Again, the common thought among the kids was that we had stopped at them all, but sadly it was merely as many as we could work into our several week trip. I could certainly have found more, had time not been an issue.

An Unscheduled Stop at Gettysburg

So it should come as no surprise that when we have time to kill on a road trip we often fill it with historic stops. On a recent trip to the northeast my oldest daughter and I had some extra time as we drove from Virginia to New York City. Plotting our route for the day we discovered that Gettysburg was on our way. What a wonderful way to fill a “few” extra hours!

We decided it would be fun to have an audio tour as we drove around the battlefield this time, so we started at the Gettysburg National Park Visitor Center. There were too many choices! We finally asked a National Park employee for a recommendation. After he narrowed it down to his favorite two, we plopped down $30 for the Gettysburg Field Guide (narrated by Wayne Motts) – 2 CDs and a book.  And off we went. 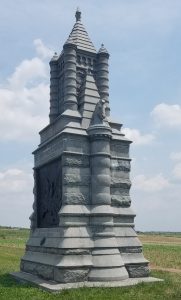 One of the countless monuments at the Gettysburg Battlefield

We spent an enjoyable two hours driving through just over half of the battlefield (that got us to Stop 9 of the 15 on that audio tour). Even knowing as much as I already did about the battle of Gettysburg, I learned more as we did the drive. I liked the CD because the narrator had a very conversational tone and shared a lot of stories as he spelled out what had happened there over 150 years before. (A note about this particular CD set – we don’t recommend it for a drive through the battlefield with younger children or others who don’t want to hear graphic details of the battle – this narrator very much “told it like it was.” For the two adults listening to it, it was fine.)

Fortunately for our newly revived interest in Gettysburg, we were crossing back across that section of Pennsylvania a mere five days later. When we got back to the area, we made our way across the park to Stop 9 and spent the next hour or so finishing up the remainder of the CD. And we pondered what life must have been like that July for those in the sleepy town of Gettysburg who suddenly found themselves caught in the crossfire of these two large armies. 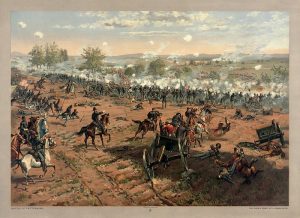 A depiction of Pickett’s Charge

As we drove, and listened to the stories, I found myself wanting to re-watch the movie Gettysburg. And I found myself reaching for my phone and Wikipedia on several occasions to fill in even more of the details.

No matter how often I watch the movie, make that drive, or stand on the edge of the field where Pickett’s Charge started (or ended), I never tire of thinking about the countless men who gave so much in that bloody conflict.

There are many things we can learn from a study of history, but remembering the sacrifices of those who fought for our freedom should certainly be high on that list!

Please remember, history must be learned in order not to be forgotten.